What a devastating field goal miss last night. Valleys can be so dark when you are in them.

You don’t know me. My name is Brian Carnesecchi. I live in Detroit. I am 37 years old, married with 4 kids, and I’m a lifelong Bears fan.

I just finished watching the Bears’ loss to the Eagles with my family. I know you must be devastated about missing that field goal to lose the game. Even though the loss can be placed on the whole team, I imagine you are haunted with a lot of regret about that miss.

I am writing to thank you. When I put my 10 year old son to bed tonight, I told him how much I would commend you for being out there and trying. I know you gave it your best. It is no small thing to have accomplished being a professional football player.

And you failed in that moment. But I would rather have a son who was out there trying to be great than a son sitting at home criticizing everyone else for their failures. I pray you see how blessed you are to be in this situation.

This loss will hurt for a while. And I would not be surprised if you have nightmares about it for a while. However, after swallowing this bitter pill, I pray that you use it in your life to become a better person. We all have trials and setbacks. What matters is how we respond to them.

You see Cody, my son Zachary, who is now 10 years old, will never have the chance to be in a position like you were in tonight. When Zachary turned 6 years old, he was diagnosed with a rare form of cancer called Ewing’s Sarcoma. The doctors found a tumor in his pelvis. After 12 rounds of chemotherapy, he had a massive surgery to remove about 30% of his pelvis on his left side including his left hip socket. Once his body recovered enough, he then had 27 more rounds of chemo. It has been 3.5 years since his last chemo treatment and Zachary is currently doing great.

However, although he has found a new boyhood love for football and for the Bears, he understands that he will never be able to play the sport. It would be too risky for his body and his athletic abilities have been significantly diminished from his surgery. He now runs with a limp and struggles to keep up with his 8 year old brother.

I don’t feel sorry for him or our family though. We know everything happens for a reason. Going through that trial and now living every day always aware his cancer could return has been the hardest thing my wife and I have ever had to go through so far in our life. But it has been such a blessing. It has given us so many opportunities to be an encouragement to others. And it has taught us to measure life with more gratitude and sobriety. Our priorities have been recalibrated according to what matters most.

So although this loss hurts and that field goal miss leaves you with a pit in your stomach, use it to become great–whether  in football or as a human being. Grow from the struggle.

By the way, you can check out a facebook page we used to chronicle Zachary’s cancer story on facebook @ZacharysStory. 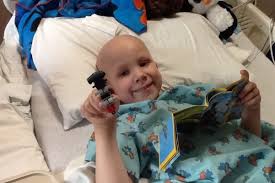 Zachary about a week after his surgery.

Zachary is on the right between his sisters. Right before singing at a Christmas choir concert.

I am a free thinker, a former classroom teacher, a business owner, a husband, and a father. With Inspired Resolve I seek to encourage Christian men to life to the fullest as God's man. View more posts

2 thoughts on “An Open Letter to Cody Parkey”

This site uses Akismet to reduce spam. Learn how your comment data is processed.